In this segment you are going to learn how make a python command line program to scrape a website for all its links and save those links to a text file for later processing. This program will cover many topics from making HTTP requests, Parsing HTML, using command line arguments and file input and output. First off I’m using Python version 3.6.2 and the BeautifulSoup HTML parsing library and the Requests HTTP library, if you don’t have either then type the following command to have them installed on your environment. So let’s get started.

Now let’s begin writing our script. First let’s import all the modules we will need:

Line 1 is the path to my virtual environment’s python interpreter. On line 2 we are import the sys module so we can access system specific parameters like command line arguments that are passed to the script. Line 3 we import the Requests library for making HTTP requests, and the BeautifulSoup library for parsing HTML. Now let’s move on to code.

Here we will check sys.argv, which is a list that contains the arguments passed to the program. The first element in the argv list(argv[0]) is the name of the program, and anything after is an argument. The program requires a url(argv[1]) and filename(argv[2]). If the arguments are not satisfied then the script will display a usage statement. Now let’s move inside the if block and begin coding the script:

On lines 2-3 we are simply storing the command line arguments in the url and file_name variables for readability. Let’s move on to making the HTTP request.

On line 5, we are printing a message to the user so the user knows the program is working.

On line 6 we using the Requests library to make an HTTP get request using requests.get(url) and storing it in the response variable.

On line 7 we are calling the .raise_for_status() method which will return an HTTPError if the HTTP request returned an unsuccessful status code.

On line 1 we are opening a file in binary mode for writing(‘wb’) and storing it in the file variable.

On line 2 we are simply providing the user feedback by printing a message.

On line 3 we iterate through the links list which contains the links we grabbed using soup.findall(‘a’) and storing each link object in the link variable.

On line 4 we are getting the a tag’s href attribute by using .get() method on the link object and storing it in the href variable and appending a newline(\n) so each link is on its own line.

On line 5 we are printing the link to the file. Notice that were calling .encode() on the href variable, remember opened the file for writing in binary mode and therefore we must encode the string as a bytes-like object otherwise you will get a TypeError.

On line 6 we are closing the file with the .close() method and printing a message on line 7 to the user letting them know the processing is done. Now let’s look at the completed program and run it.

Now all you
have to do is type this into the command line:

Now all you have to do is open up the links file in an editor to verify they were indeed written. 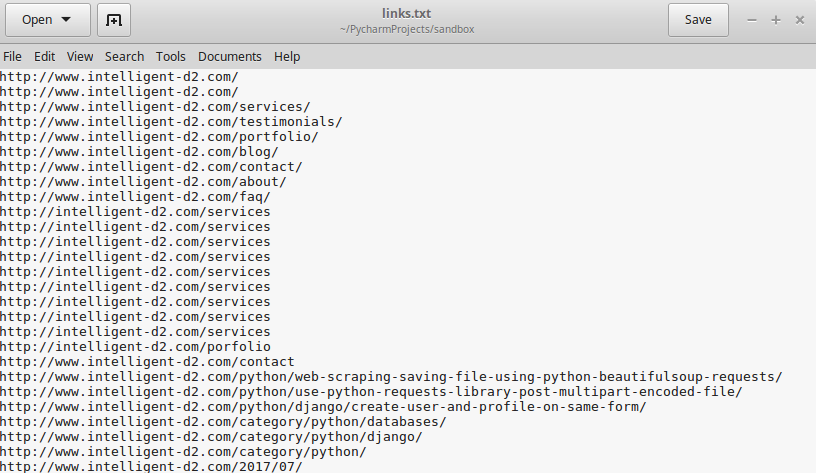 And that’s all there is to it. You have now successfully written a web scraper that saves links to a file on your computer. You can take this concept and easily expand it for all sorts of web data processing.

9 thoughts on “Web scraping and saving to a file using Python, BeautifulSoup and Requests”